It’s easy to get to the Hollywood Hills Suites, just follow the directions below, or find us on Google Maps.

Exit GOWER. Turn LEFT onto GOWER, go straight under the freeway overpass and make your first RIGHT onto YUCCA. Make your first LEFT onto VISTA DEL MAR AVE. The property is the second house on the left.

The metro station of Hollywood and Vine, is located just one block away giving you quick access to Universal Studios, historic downtown Pasadena and California beaches. The iconic Capitol Records building faces directly one of our 2nd level units, the Capitol Records Suite, and the Pantages Theatre is just around the corner to grab a Broadway musical while you’re visiting.

If you are in the entertainment business, you are centrally located to all the major studios and production houses nearby, stretched along Hollywood and Sunset Boulevard, including Siren, Sunset & Gower Studios, Sunset & Bronson studios, Raleigh Studios, Paramount Studios, 20th Century Fox, Nickelodeon, Jim Henson Studios, CNN, and many more. Additional studios, including ABC and NBC are a 10 minute drive to Burbank on the 101 freeway.

For nature lovers a quick walk up to Beachwood Boulevard, off of Franklin, brings you right underneath the Hollywood Sign for a perfect photo op, and to hiking and horseback at Griffith Park, known to be the largest urban Park in the U.S. 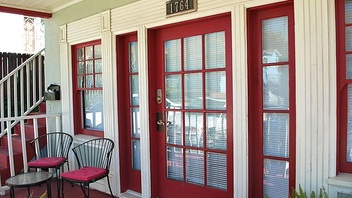 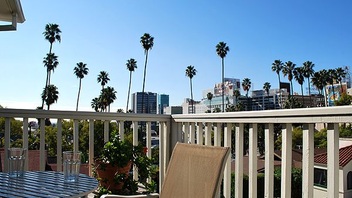